A Guide to the Roderic C. Knight Musical Instrument Collection

Portal for learning about and accessing the images and metadata available in this collection hosted by CONTENTdm.

A BRIEF HISTORY
by Roderic Knight, 2021

This collection of musical instruments, toys, and various other sound-producing devices from around the world was “born” in the spring of 2008, the result of work by twenty students enrolled in a year-long seminar in organology (the scientific study of musical instruments), the last course I taught at Oberlin.  Their names will be found in the description lines for the instruments. A class project was to mount and maintain a year-long changing exhibit in the Science Center, seen here with some of the students: 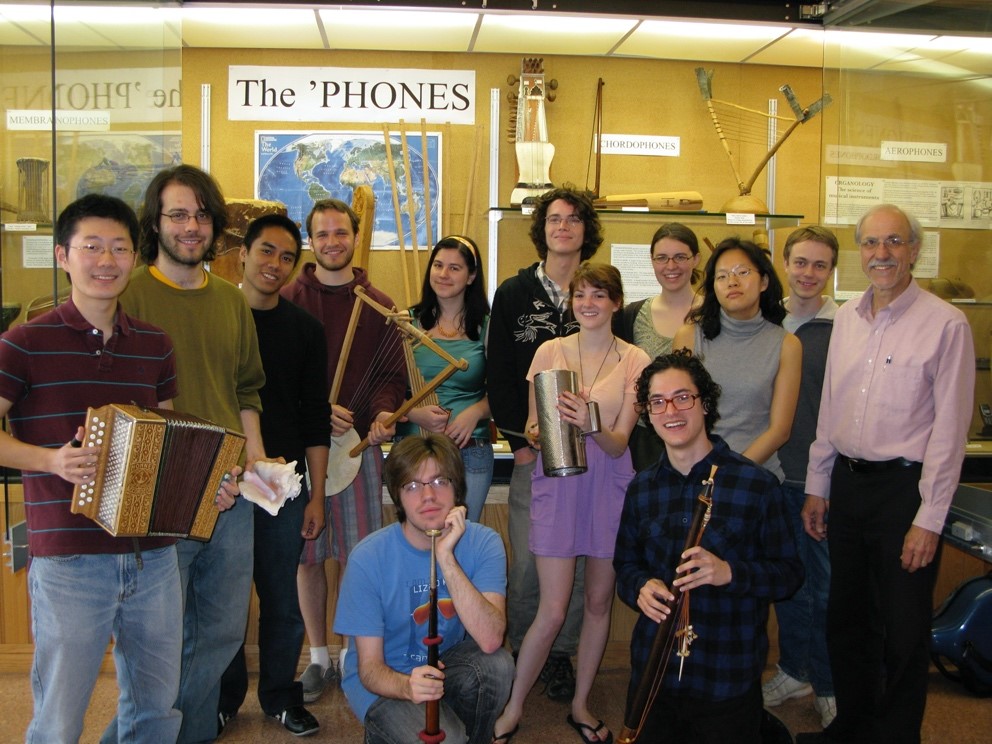 The actual collecting of the instruments is a more complicated story.  The heart of the collection consists of instruments I purchased over the course of my career and gave to the conservatory upon my retirement. To these have been added others, the oldest a collection given to Oberlin in 1927 that had been kept in the Allen Memorial Art Museum for lack of another place, with others given by various faculty members and students from the mid 20th century to the present.  Also included are instruments purchased by the Conservatory for use in ethnomusicology ensembles, as taught by my predecessor, Sara Stalder, by Alan Thrasher, my sabbatical replacement in 1981, and by me.  In 1971 the college also purchased a Javanese gamelan, an ensemble of bronze-keyed instruments and gongs, to be used in an ensemble originally taught by Molly Johnson, and now by  Prof. Jennifer Fraser.  These instruments are not included in the collection, but may be seen and studied here.

In preparing the catalog, we began with my instruments, assembling them in an approximately chronological order.  Thus, instrument #1 is a double-reed from Thailand, which I bought in the late 1950s when I was no more than a high school clarinetist in Los Angeles.  It appealed to me because it was another woodwind.  As I embarked on my career I began to take instrument collecting more seriously.  In 1964 I was teaching western music (and directing a high school band) in Sierra Leone, West Africa.  My thoughts were turning to ethnomusicology, and I began buying instruments at every opportunity.  By the time I came to Oberlin in 1976, I had acquired still more, collected during my doctoral research in The Gambia in 1970.  I had also done graduate studies at UCLA with Professor Klaus Wachsmann, whose stature as an organologist encouraged me to make this one of my specialties.   (The term organology, incidentally, is drawn from the term organographia, used by Michael Praetorius as the title for vol. 2 of his 1619 treatise, Syntagma Musicum.  It is derived from the Greek organon for an implement or tool, in this case applied to mean the “tools of music.”)

The instruments are housed in various places in the conservatory, and some are usually on display.  Many have been used in ensembles, while others serve primarily as demonstration pieces in classes.  All are available for study purposes.  Queries about the collection are welcome.  Please email rknight@oberlin.edu.

An additional use of the collection is to provide concrete examples for instrument classification.  One of the objectives of the 2007-08 organology seminar was to study the Hornbostel-Sachs system of classification, devised in 1914 by E. M. Hornbostel and Curt Sachs (and translated from German to English in 1961 by Klaus Wachsmann).  What revisions or improvements might be possible?  Pondering the questions left unanswered at the end, I felt motivated to work on a complete revision of the system, which I have named the Knight Revision of Hornbostel-Sachs, or K-Rev for short.  The details are covered in the Classification section below, but one item may be noted here.  Some instruments are missing their proper names.  These are identified instead by a generic term, noted as follows: “gen. basket rattle.”